Our History: Growing Up & Out 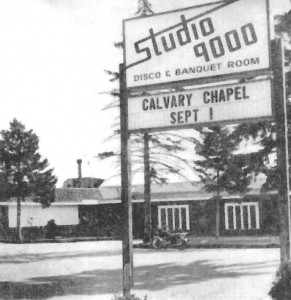 As the need for more space became crucial, the search was on for another facility. Pastor Dwight and John Gilmour, a local musician, looked at renovating a building at 742 W. College Avenue, the former ‘Pendulum’ and ‘Rich Man, Poor Man’ night spots. The front half would be home to ‘Gilmour Brothers Music’, and the back, a possible church. But the Lord had other plans, and directed us to open the first ‘Pilgrims’ Café’ in the rear of that building in October 1980; Calvary Chapel had its church office in the back room. Pilgrims’ Café produced even more fruit for the kingdom as many people came in for concerts and often got to hear a clear presentation of the Gospel as young, talented musicians shared their gifts on weekend evenings. Calvary Chapel also began to see the natural progression of families being formed as the Lord brought several believers together in marriage at that time. With the addition of spouses and children, the need for a larger worship facility became greater.

In 1982, negotiations began with the owner of the former ‘Studio 9000’ teen disco at 2136 E. Newberry St. In its many incarnations, it had been a dairy and a motorcycle shop as well. The present owner was asking $240,000 with a down-payment of $80,000, which to us was an exorbitant amount of money considering the size of our fellowship–and our budget.

We had only $16,000 available to put down and we desired a land contract. But the city wanted to shut down the disco, and we knew that if the Lord was in it He would see to it that we would acquire it. The owner called his bank, and to our delight he informed us that the amount we needed to secure the property was what we had, to the penny–$16,000. Thus began a move and an extensive remodel from a disco to the worship and fellowship center you see today, with a few more changes yet to come in the future.

The disco had the usual trappings–a plexiglass dance floor, a disco ball, no windows anywhere (to keep any light out, of course!) black and red shag carpeting, black walls and a red ceiling. The building was gutted, and a portion of the roof raised to accommodate a cathedral ceiling and skylights to let in some much-needed light. The project began in late spring and opened September 1, 1982.

In the absence of a Sunday School wing, what is now the Fellowship Hall was converted to Sunday School classrooms. We were able to maintain this arrangement for 2 years. In 1984 our first building project was begun with the addition of the Sunday School wing. Most of the work was done by the brethren in the fellowship. We put in a basement level, as well as a third floor which eventually housed the present offices. Pilgrims’ Café was closed in 1984 as the Lord moved us to concentrate our efforts and finances for discipling and ministering to the many new families at Calvary Chapel.

After this addition was finished, we joined with a group of parents who desired to see a Christian School begun in the area.  Though our desire was to use the new addition for classrooms for the school, we were informed that the hallways did not meet city codes, so the parents undertook an unusual ministry: taking turns putting up and tearing down temporary classroom walls in the fellowship hall.

They volunteered for Friday night tear-down, or Sunday evening set-up of the walls needed to enclose the ACS children throughout the week while still accommodating Calvary Chapel’s ever-growing fellowship needs on Sunday mornings. All in all, it was a labor of love that many parents still remember helping with.

In the years that followed, Calvary saw some general but much-needed smaller remodeling jobs: kitchen, restrooms, and other similar projects. In 1988 the front of the church building received a new look with the completion of the current stone facade. 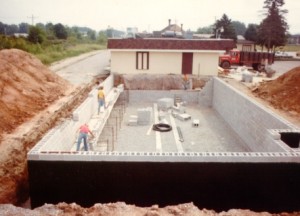 In August of 1995, an expansion project was needed in the sanctuary. To accommodate our growth we removed a wall exposing the old tape lending library and prayer room. New pews were added and padded, the stage size was increased, the sound room was moved and we added new carpeting and a new ceiling.

In October 1995 we  broke ground to expand the Sunday School area. The first night, while we hosted a Bruce Carroll concert in the sanctuary, we struck water and flooded the basement; but when the work was accomplished we were finally able to put an end to the frequent water problems we had previously struggled with.

We took occupancy in July 1996 with a new hallway in front of the Sunday School, 3 completed levels for increased child care and Calvary Kids Club, a Youth Group meeting room, and some attractive landscaping.

In 1995 we purchased the lot across from the Laundromat for roughly one-third the assessed value, and it now serves as much-needed parking.

In 1998 the Lord directed us to once again build an outreach to the community through the coffeehouse venue. This time our location was even better – right on College Avenue in the heart of the city. He provided a great old Victorian structure owned by the YMCA that badly needed some updating – or ‘back-dating’, in this case. The renovation of the former Langstadt’s Electric/Lighting facility at 233 E. College Avenue produced the new “Pilgrims’ Café’, a place where the local body could fellowship and be a witness to our community. The previous incarnations of this beautiful building include Lyon’s Cigar Store and Palace of Sweets before it was Langstadt’s for many years. In it’s day, it was considered one of the finest buildings on the Avenue, with all the modern amenities of 1885. Fast forward 107 years to opening day of our new/old look : December 7, 1998. The City of Appleton acknowledged our efforts and gave us two awards; the Come Back award in 1998, and the Lilly Bud award in 1999 for our period restoration work on the building.